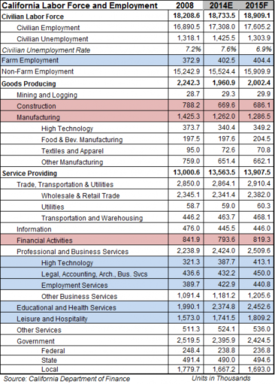 The California economy has recovered from the effects of the 2008 Great Recession with employment rebounding to historic levels, albeit with certain sectors outperforming other sectors – highlighting a zero sum outcome. The California economy is expected to exceed $2.04 trillion in output in 2014, ranking the state as the 8th largest GDP in the world, just behind the United Kingdom and Brazil. Among the winners, the California service sector has shown very strong employment growth as social media and mobile app development has taken hold in the technology sector and driven robust hiring gains. The flurry of new IPOs and growing market capitalization of Silicon Valley technology firms like Apple, Google, Facebook, etc. has ushered in a wealth effect in the Bay Area economy, driving real estate prices and consumption back up in Northern California.

The NAFTA treaty substantially motivated the growth in cross-border trade and investment with Mexico, benefiting California as the state has undergone greater economic integration with Mexico.

Other service sectors with strong employment growth include Education, Healthcare, HR Services, and Leisure & Hospitality. All four sectors have benefitted from a growing tailwind and increased consumer demand for improved lifestyles; spurring growth in healthcare (motivated by the Affordable Care Act) and education as a portion of household budgets. This is dramatically different than historical norms where retail consumption or new home purchases represented a larger portion of household budgets.

Leisure and hospitality businesses have benefitted from a rebounding global economy and a dramatic upturn in foreign visitors to California (up 7% YOY), led by Mexico and Asian visitors. The upturn has been a bright spot for the Southern California economy, which was particularly hard hit by the reverse in the housing market between2008 and 2010 and the resulting increase in unemployment.

However, not all sectors rebounded following the Great Recession. Sectors of the California economy that have lagged and are expected to lag include the goods producing sectors, primarily construction, and all sectors of manufacturing. Collectively these sectors have lost almost 300,000 jobs since 2008 and are expected to see minimal growth in the next few years.

Although construction employment has rebounded almost 15% from a decade low in 2010, 2015 projections remain well below peaks in 2008 and should remain compressed as new housing starts have slowed in previous months.