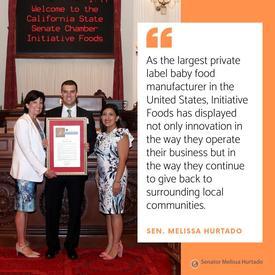 SACRAMENTO, CA – State Senator Melissa Hurtado (D-Sanger) is pleased to announce that Initiative Foods was named Senate District 14’s Small Business of the Year. The award recognizes outstanding small businesses that have demonstrated leadership in paving the way for other local businesses and its community.

“As the largest private label baby food manufacturer in the United States, Initiative Foods has displayed not only innovation in the way they operate their business but in the way they continue to give back to surrounding local communities,” stated Sen. Melissa Hurtado. “Their grit and will to remain true to their homegrown roots in the City of Sanger is a great representation of the Central Valley. For this reason, I am honored to recognize Initiative Foods as the 2019 Small Business of the Year.”

“The Initiative Foods team was honored to be receiving this recognition from Senator Hurtado. Our mission of making the very best baby food for new and growing families has been supported by the Senator from the time we first met during a Sanger City Council meeting. She has been a strong and positive force as we recover from the devastating fire in 2016 to our resurgence today. The Senator’s support of small business such as ours is adding meaningful jobs and a way forward for people here in Sanger and throughout Central California.”

Senator Melissa Hurtado is an advocate for expanding access to health care and clean water, growing educational opportunities and creating more quality jobs. She represents the 14th Senate District in California, which includes cities in Fresno, Kern, Kings and Tulare counties. Senator Hurtado was born in Fresno, California and was raised in the City of Sanger, where she still resides with her family.