Impact of decreased Government Expenditures: California and the Central Valley 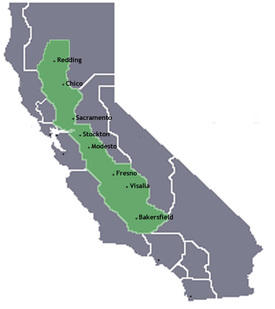 The potential impact of spending cuts that will take effect if Congress and the President currently can’t agree on a plan to avoid is referred to as the balance of the so-called “fiscal cliff” remains a major obstacle to fortifying business confidence in 2013. The American Taxpayer Relief Act of 2012 (“ATRA”) was enacted January 1, 2013 avoiding substantial increases in marginal tax rates for the majority of U.S. taxpayers, however, postponed undertaking any budget cuts related to sequestration.

If legislation had not been passed the Congressional Budget Office (CBO) estimates that there would have been a $600B hit to the U.S. economy if political leaders do not act to curtail large tax increases and government program cuts, representing 3-4% of U.S. GDP. There is still the pending matter of substantial automatic federal program cuts across the board in sixty-days, at the end of February 2013, as part of negotiating the federal debt ceiling.

The California economy has shown evidence of recovery with unemployment dropping to 9.80%, down from 11.5% a year ago, and creating over half of the nation’s new jobs in 2012. The state’s economy is expected to end up with state GDP in excess of $2.1 trillion, over 13% of the U.S. this year. About 40% of sequestration impacts are all on state and local government programs coupled with suspension of unemployment insurance, payroll taxes going up and the unclear possible result of changes in Obama Care healthcare funding.

Stephen S. Fuller, a George Mason University professor, projects that California could lose 135,209 jobs as a result of Department of Defense cuts and an additional 90,255 cuts in non-defense jobs. However ATRA did preserve unemployment payments for 12 months more for 400,000 Californians that were slated to lose these benefits when the federal extension to 99 weeks of coverage expired at the end of 2012.

Officials in California are wary of such a scenario and have warned that job losses could cause the state to lose as much as $22.7 billion in gross state product, or over 1% of the state’s GDP and abating its economic recovery. Nationally, the CBO estimates a 0.5% contraction in GDP.

The Central Valley represents about 11-12% of the state’s economy and arguably represents California’s most vulnerable region in terms of the upcoming reduction in government spending. Last year, the federal government sent close to $12 billion to Fresno, Tulare, Kings and Madera counties in the form of, among other things, Social Security payments, Medicare, food stamps and unemployment insurance. In Fresno County, those government benefits accounted for about 23% of all personal income last year. In Tulare County, it was 24%; Madera County, 22%; and Kings County, 19%.

“The Valley is an interesting place because so many get support,” said David Schecter, a Fresno State political science professor. But cutting any of those benefits — and Schecter included farm subsidies, mortgage interest deductions and other popular government programs that also benefit the Valley — will be “messy,” he said.

A recent announcement by the monthly survey conducted for the San Joaquin Valley Business Conditions Index highlights that looking ahead six months, economic optimism, captured by the business confidence index, advanced to a very weak 39.8 from 36.1. A positive level of business confidence is an index reading of 50 and above. Uncertainty surrounding the fiscal cliff and healthcare reform continues to lower business confidence for Valley entrepreneurs.