California continues to grow above the national pace 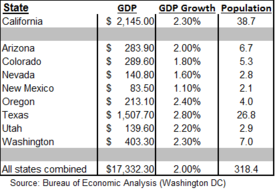 The Golden State’s economy, which represents over 12% of U.S. GDP, continues to grow at a pace slightly ahead of the nations’, 2.3% versus 2.0%. However, these gains have been heavily weighted toward the state’s larger metropolitan areas along the coast. Technology, tourism, and retail trade have led the recovery in job growth in recent years, which has helped trim the unemployment rate and revive housing demand.

While preliminary figures showed job growth moderating during the second half of the year, they also indicated gains broadening across more industries and metropolitan areas. Revisions to the employment figures are expected to show that job growth was about one percentage point better than initially reported in 2013.

California’s unemployment rate fell 1.4 percentage points in 2013 and ended the year at 8.3 percent. As in most states, concerns about sluggish labor force growth have brought some of this improvement into question. The state’s labor force has essentially kept pace with the nation; however, the narrowing in California’s unemployment rate relative to the nation is still noteworthy and suggests that the state is outperforming the nation.

The consensus of economists suggests that the unemployment rate will continue to drop this year, as construction activity strengthens and manufacturing improves. Both sectors were hit hard during the recession and have been slow to recover, which means many former workers are either marginally attached to the workforce or out of the workforce entirely.

A key driver of economic has been California’s merchandise exports. The December-February period totaled $41.23 billion, a nominal increase of 6.4% over the same period one year earlier.

Mexico remained California’s single largest export market during the latest three-month period, with the value of exports edging up by 8.0% to $5.80 billion. Exports to Canada rose by 16.0% to $4.54 billion, while shipments to China surged by 23.0% to $4.12 billion. Japan (down 7.1% to $2.98 billion) and the Republic of Korea (up 13.2% to $2.12 billion) rounded out California’s ‘Top Five’ export destinations in the latest three-month period.

California accounted for 10.8% of total U.S. merchandise exports over the past three months, up from its 10.3% share in the same period one year earlier.