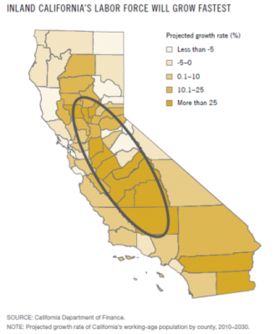 Despite improvements in the economy, California workers are still struggling. Unemployment remains high even by historical standards and as of March 2013, the average period of unemployment was 31 weeks—only slightly lower than it was during the Great Recession. Largely because of labor market conditions, median household income has increased slowly and is still below its pre-recession peak. In 2013, the median family earned about $57,500, reflecting an improvement from the low in 2011 but still 8 percent lower than in 2006. Additionally, the recovery has been uneven, as median income was higher in 2013 although half of the state’s families were earning $57,500 or less and nearly one-quarter earned more than $100,000.

On a positive note, housing prices have increased year over year for 37 consecutive months in California. According to Zillow, in May of 2015, the median U.S. home was worth $179,200 while in California, the median home was worth $441,800. In 2014, the median housing prices have increased across California—in both inland and coastal regions—with the largest percentage gains in the El Centro, Merced, and Vallejo metro areas (16–18 percent increases since November 2013) and the largest dollar increases in the San Jose, San Francisco, and Santa Rosa metro areas ($48,000 or more). This expensive housing creates pressures on both households and employers and reflects the mix of jobs, industries, and amenities across the state.

Economic differences within California are considerable and likely to persist. Unemployment tends to be higher in the Central Valley—sometimes considerably higher—than in the urban and coastal parts of the state. This variation is attributable to different industry mixes and job growth patterns and the faster-growing workforce in the inland parts of the state. Even among urban coastal areas, California’s regional economies don’t move in concert: in most years some regions of the state grow quickly while others grow slowly or contract. Although Inland California currently has higher unemployment rates, that region’s low housing costs will contribute to the growth of its workforce according to the California Department of Finance (“DOF”) most recent forecast. The working-age population in much of the Central Valley is projected to grow more than 25 percent between 2010 and 2030 while the statewide growth rate is predicted to be just 8.8 percent.

The map to the right highlights the expected out-sized labor force growth expected to emerge in the California Central Valley relative to the rest of the state.

Central Valley counties, notably Placer, El Dorado, Fresno, Madera, San Joaquin and Kern are forecast to show above average job growth potential over the next 3 years, between 3.9 percent and 2.5 percent. The principal California population and economic engines of Los Angeles, San Francisco and Orange/San Diego counties are expected to grow 2.5 percent or less over the next three years.

Strong job growth in services will continue; manufacturing will stagnate

Over the past year, service industry jobs—both higher-skilled jobs in professional services, education, and health care jobs and lower-skilled jobs in accommodation, food, and administrative services—have added 66 percent of all new jobs in California and are projected to continue to lead growth. Manufacturing accounted for only 8 percent of California’s employment in 2014 and year over year, manufacturing employment was virtually unchanged, while almost every other industry in the state has grown. Manufacturing has been declining for decades and will continue to be a sluggish sector in California.

During the recession, the construction industry contracted most sharply (dropping 37 percent from peak to trough). As the housing market rebounds and existing housing is being absorbed by California’s growing population, construction employment is expected to rebound as well. Over the past year, construction employment grew by 6.3 percent, faster than any other industry (except administrative services). Construction is projected to grow 26 percent by 2020—making construction one of the fastest growing industries in the state.

California consistently scores poorly in many business climate rankings that focus primarily on taxes and other costs of doing business. However, the state’s economic performance is stronger than these business climate rankings alone would indicate. While businesses in California face higher costs, they enjoy many other benefits, such as a highly skilled workforce, readily available sources of capital, strong support for new business, and the many amenities that make California such an attractive place to live.