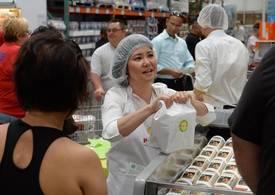 Flavia Takahashi-Flores and her Fresno snack company, P*DE*Q, won top honors from a panel of judges from the business and venture capital communities at the Valley Entrepreneur Showcase, a highlight of the Central Valley Venture Forum last week in Clovis.

P*DE*Q, which manufactures bite-sized, tapioca-based bread snacks inspired by Takahashi-Flores’ native Brazil, received the Best of Show award, besting four other entrepreneurs who made investment pitches to the judges. P*DE*Q is short for pão de queijo, the Portuguese name of the gluten-free cheese-bread snacks.

Takahashi-Flores launched P*DE*Q in early 2011 and quickly built a following among the region’s gluten-free community. The company has since introduced new flavors and new products, including frozen pre-baked and ready-to-bake snacks, pie crusts and more.

The business opened a storefront and manufacturing space near Fresno High School in 2012, and established a second location in Clovis in 2013. The Fresno location closed last December after the company contracted with Wawona Frozen Foods to provide enough manufacturing capacity to serve a growing number of retail stores.

The Clovis bakery and storefront closed several months ago, but P*DE*Q products are sold by a number of local retailers and about two dozen Costco stores in the western U.S.