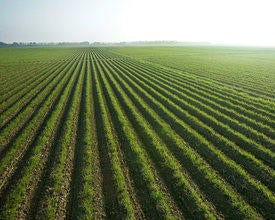 Farmers like to think that their business is fairly recession-proof, that people will eat even while cutting back on other spending.

A banker speaking this week in Modesto had a chart to support this. It showed how the overall stock market, as measured by the S&P 500, stumbled badly in 2008 and stayed down for most of the next half-decade. Meanwhile, a composite of 109 food companies recovered from an initial loss and nearly doubled investor returns in recent years.

The general strength of farming was a key theme at the second annual California Food & Ag Summit. But speakers at the Thursday afternoon meeting also noted the state’s water issues, including a drought now in its third year and a shortage of reservoir space when the big storms do come.

The stock comparison came from Derik Miller, director of food and agriculture banking at Wells Fargo Securities in Charlotte, N.C. He also noted the high prices for recent acquisitions, such as the $28 billion paid by Berkshire Hathaway for H.J. Heinz.

The outlook is good as well for Harris Ranch, California’s largest beef producer with operations throughout the central San Joaquin Valley, and Olam’s Spices and Vegetable Ingredients division based in Fresno. Both companies were featured Thursday.

“We believe very much in California, the investment in processing,” Olam President Greg Estep said. “We believe it has a bright future.”

The summit was sponsored by Wells Fargo, the accounting firm of PricewaterhouseCoopers and the Central Valley Fund, an investment group.

The water discussion dealt in part with the controversial plan to build a pair of tunnels on the east side of the Sacramento-San Joaquin Delta. Supporters see it as a way to make water supplies more reliable while protecting the delta ecosystem, but opponents say farmers and delta fish alike would suffer.

The main point of agreement was that the state, in most years, does not have enough water to meet the needs of farms, cities and fish.

“We need to be able to capture water when it’s in abundance, which we can’t today,” said Sunne Wright McPeak, president of the Delta Vision Foundation and chief executive officer of the California Emerging Technology Fund. She noted that she was raised on a Merced County dairy farm before a career that included service in Gov. Arnold Schwarzenegger’s Cabinet.

McPeak called for groundwater recharge equal to a year’s demand in the state, along with forest thinning projects that increase flows into rivers while reducing the wildfire risk.

The drought has had uneven effects around the San Joaquin Valley. Some parts of the west and south face severe cutbacks from the federal Central Valley Project. Areas with more control over local rivers have fared better but are concerned about a dry 2014.

Speakers also said the state’s farmers have to deal with tight labor supplies, changes in foreign exchange rates, consumer tastes and other issues.

Mike Swanson, an economist for Wells Fargo in Minneapolis, said the Valley’s huge almond industry, now enjoying high prices, could swing back to the low levels of 1999 to 2001. “This type of cyclicality is not going to go away, and it’s fundamental to the system,” he said